November 9, 2017 will be a day that Roy Moore never forgets.

It will also mark the day that we started keeping track of all the Alabama politicians or “respected community members” who have continued their support for a pedophile or became pedophile apologists.

Alabama voters – future and present – should know if the candidate that wants their vote is supporting a pedophile.

“Even if you accept the Washington Post’s report as being completely true, it’s much ado about very little,” Alabama State Auditor Jim Zeigler said in a phone interview. (http://www.montgomeryadvertiser.com/story/news/politics/southunionstreet/2017/11/09/woman-says-roy-moore-had-sexual-contact-her-when-she-14/848819001/)

“Take the Bible. Zachariah and Elizabeth for instance. Zachariah was extremely old to marry Elizabeth and they became the parents of John the Baptist,” Ziegler said choosing his words carefully before invoking Christ. “Also take Joseph and Mary. Mary was a teenager and Joseph was an adult carpenter. They became parents of Jesus.”

**FULL DISCLOSURE: Jim Zeigler has protested in front of the clinic & POWER House this year.**

Moore supporter @Ed_Henry_HD9 called the allegations against Moore lies.
“If they were really worried about him being a predator or menace to society, why have they not been coming forward for decades?” #alpolitics #alsenate 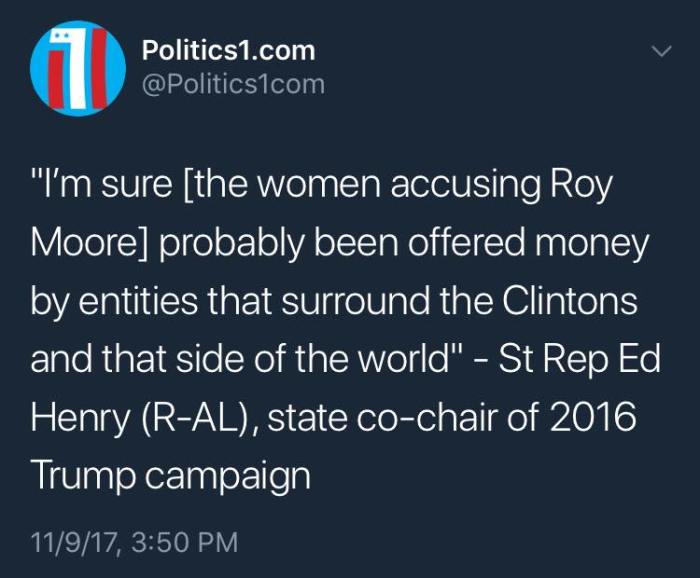 (Ed Henry’s comments above are from this article: http://www.cullmantimes.com/news/ed-henry-on-moore-accusations-i-m-not-buying-it/article_ddb8650a-c5cd-11e7-be2c-1f9ffb09ccc5.amp.html)

***Perry Hooper was on Meet the Press Daily with Chuck Todd and repeated some of his reprehensible comments.  We are currently searching for video(s) or a transcript. 11/10/17 @ 5:28PM CST***

“I don’t know these women.”

RANDY BRINSON, PRESIDENT OF THE CHRISTIAN COALITION OF ALABAMA (AND FORMER CANDIDATE FOR THE SENATE SEAT ROY MOORE IS SEEKING.)

TOMMY BATTLE, GOP MAYOR OF HUNTSVILLE & CONTENDER FOR GOVERNOR OF ALABAMA IN 2018)

(The following is pulled from a public Facebook post of an elected Alabama official who believes women.) 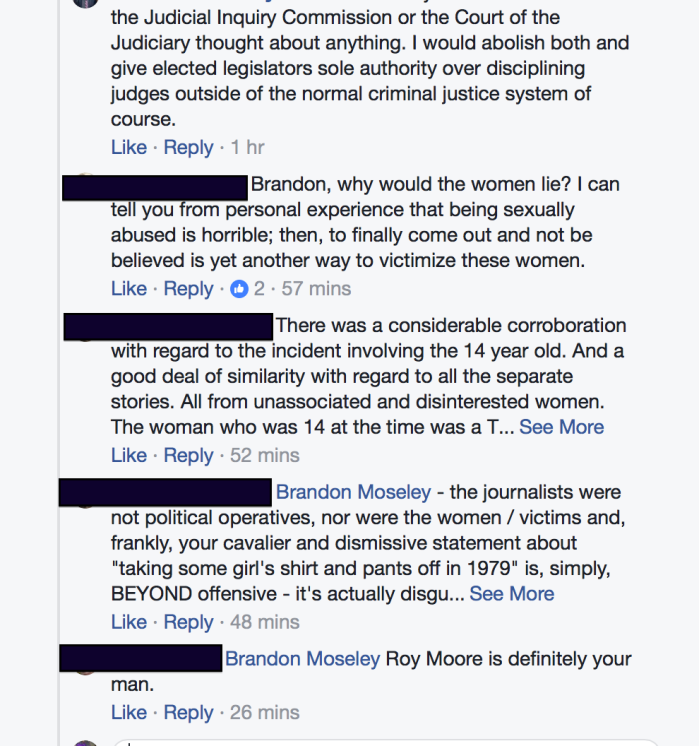 The video clip below is Mr. Moseley on CNN on 11/13/17, comparing sexually assaulting a minor to stealing a lawnmower.

(John Skipper’s quote is from: https://www.nytimes.com/2017/11/09/us/politics/mcconnell-roy-moore-sex-teenagers.html) 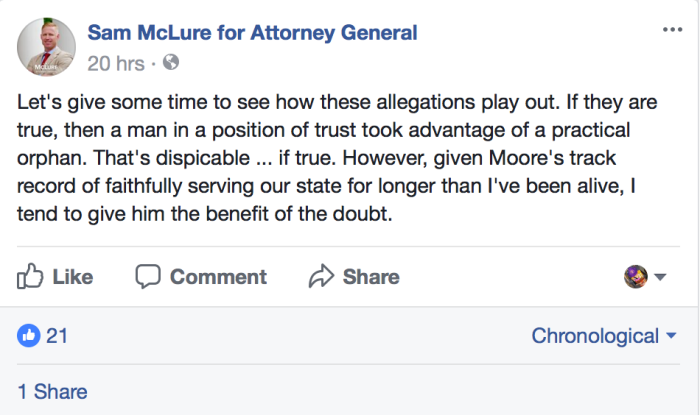 (Above text was taken from:  http://thehill.com/homenews/campaign/360214-alabama-rep-im-still-backing-moore-because-hell-vote-right-in-the-senate?amp)

(Above screenshot is from: https://www.bostonglobe.com/news/nation/2017/11/19/why-evangelicals-are-again-backing-republican-despite-allegations-sexual-misconduct/nls3lkhOHopU5fUe6bM2hJ/amp.html)

The following letter has been making the Twitter rounds as of 11/11/17.  It was given out at the Roy Moore event in Vestavia Hills.  It is…well….typical.

Here’s Roy himself, as he was talking to Sean Hannity this afternoon (11/10/17), claiming there is “collusion” but they don’t want to go public with the story yet.  (Video captured from MSNBC.) 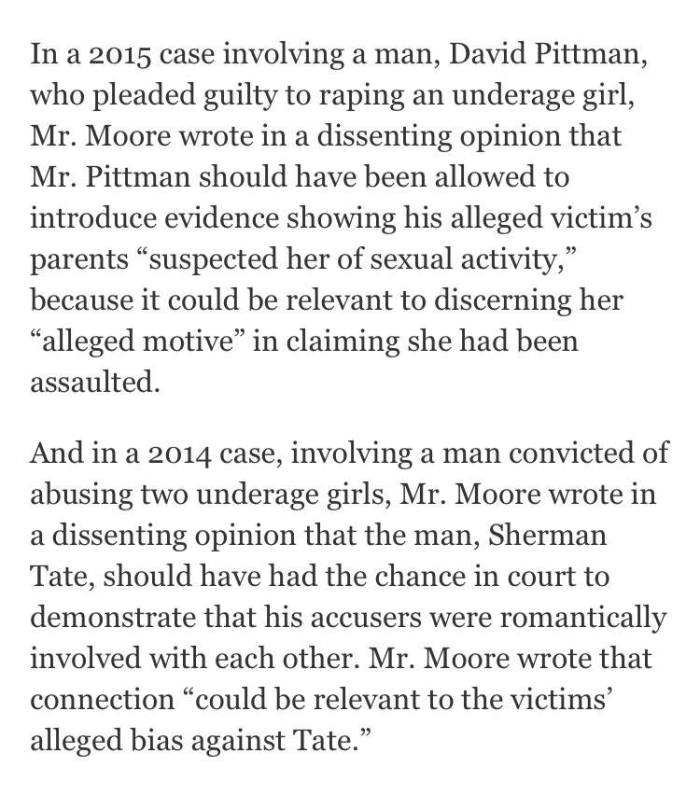 “Only one of the teens was underage!” http://www.thenewcivilrightsmovement.com/davidbadash/watch_editor_for_steve_bannon_s_breitbart_defends_roy_moore_because_only_one_of_the_teens_was_underage

Like what we do??  Please donate here!  We are a very small non profit in Alabama and depend on donations to survive.  None of our staff or volunteers are paid.

Please note that we have no disclaimers on this page. WE. BELIEVE. WOMEN. FULL STOP. If you don’t believe women, you’re an asshat. And probably a Roy Moore supporter.